Speaking about the fight during a recent public fight announcement at the new Tottenham Hotspur Stadium, the current unified heavyweight champion was in confident & focused mood ahead of the fight with mandatory challenger Usyk

“When I step into that ring, no matter how much of a nice guy I am, it’s about winning,” Joshua told Sky Sports

“It’s about defining performances and training in the right fashion so I look good, which adds stock to my value. When you fight good opponents people respect it. They have to give you credit”

“This is about being a throwback fighter and taking on all challenges. It’s about statement performances. Understanding angles, where you are when you finish punching, where shots are coming from. Everything is in reverse with a southpaw”

“That’s the technical element, then you have the spiritual element. I am a fighting person. I pray and meditate and visualise. I train my mind. That will get me a long way, as well. Mix of the technical ability and the God-given talent? Even though I’m fighting a southpaw I should be able to find ways and see gaps to exploit each of my opponents”

When asked about Usyk as a boxer, as an opponent, Joshua said: “I rate all my opponents. He’s good. It’s all about the final bell and whose hand is raised. He’s good but I’m better”

“He is a great challenger for the heavyweight titles.I’m looking to do a good job, to handle business, because I have my eyes set on other things.” 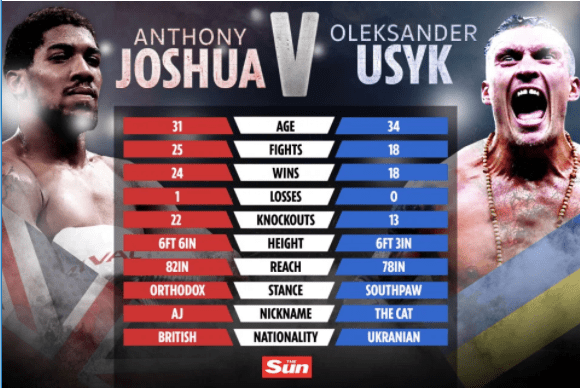