Conor Been secured a 1st round TKO victory over Samuel Vergas after a barrage of clean punches prompted the referee to stop the bout. This fight was expected to be a long tough drawn out battle for both men but referee Michael Alexander decided he had seen enough to end the fight at just 80 seconds into the first round.

It could be argued that the stoppage was early, and whilst Benn looked likely to win the fight regardless, the referee could’ve given Vargas a chance to prove he was able to fight on or not. Vargas wasn’t heavily dropped and he was on his feet up against the rope at the time of the stoppage. Vargas is known to be a tough fighter, so many watching felt it might have been an early stoppage – even if Benn would have gone on to win the fight.

In the post-fight interview, Conor Benn called out fellow Brit Amir Khan and spoke in a dominant manner, mirroring his fighting style – “Statement made; no-one bangs him out in one round. Easy. Formella, easy. Give me a proper test, give me Amir Khan. I know he’s too busy on reality shows and all that, but listen, if he wants it, he can get it.” Benn told SkySports.

Conor Been has made great improvements since his debut in 2016 and looks like a completely different fighter today. He must be given massive credit for the work he has put into his craft; boxing.

Fights going forward, a domestic clash with a welterweight rival would be very interesting to watch and there are many to choose from; Kell Brook, Amir Khan, Josh Kelly, Michael McKinson, Lewis Crocker and Ekow Essuman.

Internationally, Benn could be matched against David Avanesyan and that would be a great action packed fight for the fans. Equally there is also Vergil Ortiz Jr, Daniyar Yeleussinov, Danny Garcia, Maurice Hooker or Josesito Lopez.

Should Conor Benn continue to win and improve, he has a big and bright future ahead for him 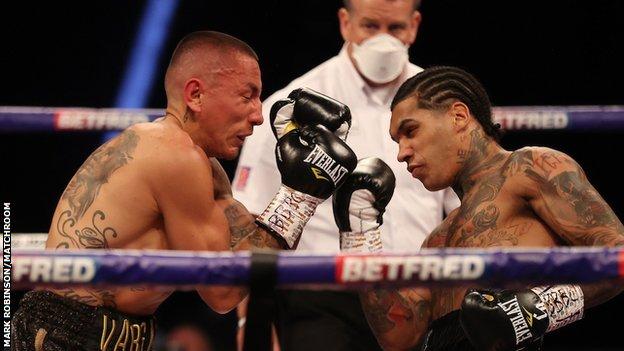