In what was an entertaining fight, Ryan Garcia overcame adversity to stopped Luke Campbell with a body shot in the seventh round. Garcia displayed not only his punching power but also grit and courage.

Fighting in front of a small but noisy crowd, the young American-Mexican pulled off the biggest victory of his professional boxing career thus far. He defeated an Olympic gold medalist and a former two-time world title challenger in Luke Campbell. The victory really was a statement by the young Garcia to other lightweights in his division.

In the second round, Luke Campbell landed a perfectly timed leftover hand punch to Garcia and he fell to the canvas. Garcia rose to this feet and took the referee’s count and appeared unhurt by the blow. Campbell spent the majority of the fight on the back foot; being cautious and looking to counter Garcia’s aggression.

The fight was a patient pace and there were offensive bursts from Garcia, with Campbell looking to counter his opponent. As the fight wore on, Garcia appeared to gather more confidence, moving forward more and more with his power punches. 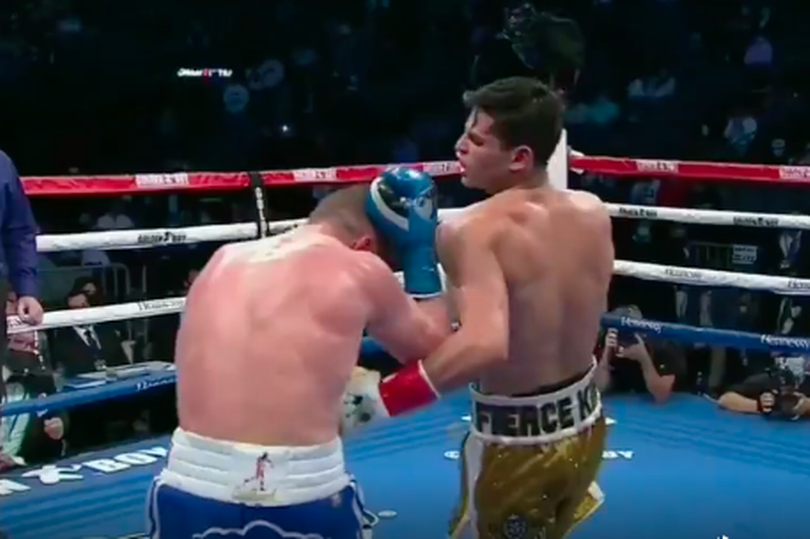 In the seventh round, Campbell came out more aggressively as he appeared to chase a fight he was losing but this left him open to Garcia quick hands and resulted in him taking a body shot that he wasn’t able to recover from. The attack was a left hook to the liver and it was Campbell’s turn to visit the canvas. This time the boxer was not able to beat the referee’s count and the fight was called off.

This triggered wild celebrations both in and outside the ring. Garcia’s corner were overwhelmed by the finished as well as his family, friends and fans in the crowd. The finish was another highlight to add to Garcia’s knockout collection and was a fan friendly for those watching on TV.