Taylor in the fight aftermath, then set her sights on big fights going forward, in order to further her legacy in the sport of boxing.

With another win under her belt, Taylor retained her undisputed title as the lightweight champion after a entertaining fight with Britain’s Natasha Jonas and moved to 18 wins, still unbeaten and a two weight world champion.

During the post-fight interview, Katie Taylor stated her desire for huge fights and identified Jessica McCaskill and Amanda Serrano as potential fights.

“There are still huge fights against the likes of Jessica McCaskill and Amanda Serrano. There is no such thing as an easy fight at this stage of your career. I want the big names, I want the big fights. There are big names out there’’

“I definitely want to challenge myself against the very, very best. That’s what I’m in the sport for’

“I don’t see the point in ducking anyone or picking and choosing opponents. I want the very best because they bring out the best in me. That’s what greatness looks like”

Katie Taylor beat Jessica McCaskill in 2017 but since their bout, she has become the undisputed welterweight champion. McCaskill is also a two weight world champion, having previously been champion at lightweight, and now at welterweight. She has a pro record of 10 wins (3 kos) and 2 losses.

Amanda Serrano and Katie Taylor are yet to trade blows in the squared circle and has a fighting background not only in boxing, but also in MMA and wrestling. Serrano is the unified featherweight world champion (WBC, WBO, IBO) and has a pro record of 40 wins (30 kos), 1 loss and 1 draw.

Should Taylor beat both champion rival in the near future, she would most definitely go down as a great in the sport of boxing, and not just for being a world champion numerous times, but for also bringing women’s boxing into the mainstream. 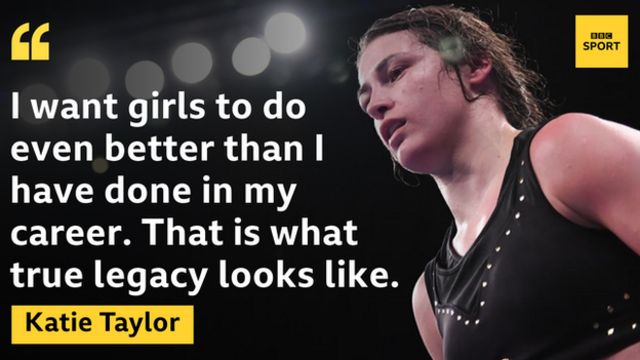