Ugas Defeats Pacquaio, In What Could Be The Filipino’s Last Fight

In what could be Pacquiao’s last fight in a career which spans four decades, he lost via a unanimous decision to Cuban’s Yordenis Ugas – in their world title welterweight clash on Saturday night in Las Vegas.

This was Pacquiao first fight in over two years and he appeared slower than previous Pacman’s fight. The boxing legend was not as quick as boxing fans have become accustomed to over the years. This was the 73rd fight for the hall of famer boxer, who has won world titles in eight divisions over four decades.

But credit must be given to Ugas who took the center of the ring for much of the fight and dominated Pacquiao with a solid jab.

Pacquiao would attempt to steal the judges’ eyes with his trademark in & out flurry of punches but it wasn’t enough to stop Ugas taking a lead in the fight, particularly in the second half of the bout.

Ugas would catch Pacquiao with big right hands occasionally as well as solid body punches, all of which seemed to take the wind out of Filipino’s sails.

Pacquiao eye began to swell as the rounds went by and he wasn’t able to gather his famous speed and power he once used, to punish his opponent.

Ugas appeared to take over the fight in the second half of their 12 round bout and both of Pacquiao eyes looked swollen.

In the end, in was down to the judges to decide who would win the fight and without any debate or outrage, the three judges  scored the fight as many onlookers had done so – unanimous decision for Ugas.

When Pacquiao was asked if this was his last bout in the post-fight interview, he replied, ‘I don’t know, I don’t know. Let me relax and then make a decision’ 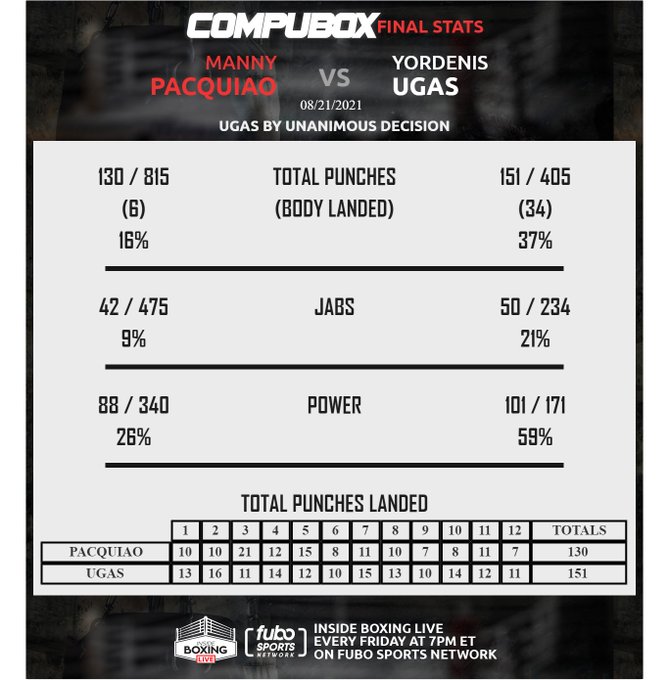